Update 4/22/2020. This one was mostly reactive to Dr White’s DPCAlliance.com essay on DPC and COVID-19. That was dated 3/19/20. I wrote this mostly in reaction to unseemly opportunism, not so much by White as by Flanagan and Springer as discussed. In retrospect, what DPC Coalition tried to do here looks almost pathetic. Expressly pitching DPC as a means of bringing telemedicine to 23 million HDHP/HSA plan members was lost in a tsunami of FFS primary care converting to telemedicine. In a follow-up piece, White admits he was wrong.

Two of the take-home lessons of the original version of this post are presented better in these briefer posts. A third is simply this: Nearly all of the fervently claimed advantages for DPC whether in a time of COVID or at any other time derive from panel size, not payment model.

I am keeping this post anyways, for context, reference, whatever.

I don’t think this a good moment for the usual coupling of disparagement of traditional practice with praise for DPC. The White article, which when published became the public face of DPC Alliance on the subject of COVID, does very little more than say , “OUR DPC patients and physicians are going to be fine; the other guys, not so much”

However, whether it be 24/7 telemedicine, emptier waiting rooms, faster response times, healthier patients more able to survive an infection, more personal knowledge whatever, isn’t every one of the cited advantages for DPC in a time of COVID equally held by FFS/concierge? Isn’t this about the panel size, not payment model?

If a pandemic mandates anything for doctors, it’s that each handle more patients, not fewer.

What about descending on Congress with a general pro-DPC agenda disguised as a crucial pandemic policy? I hope that isn’t what’s going on. But there’s more than hint of that in some quarters. One of the first DPC practictioners replied to a tweet of Dr White’s essay suggesting just that. And a recognized leader of the DPC community, chimed in, ” It’s already happening.” Here’s the tweet, the reply, and the chime in. 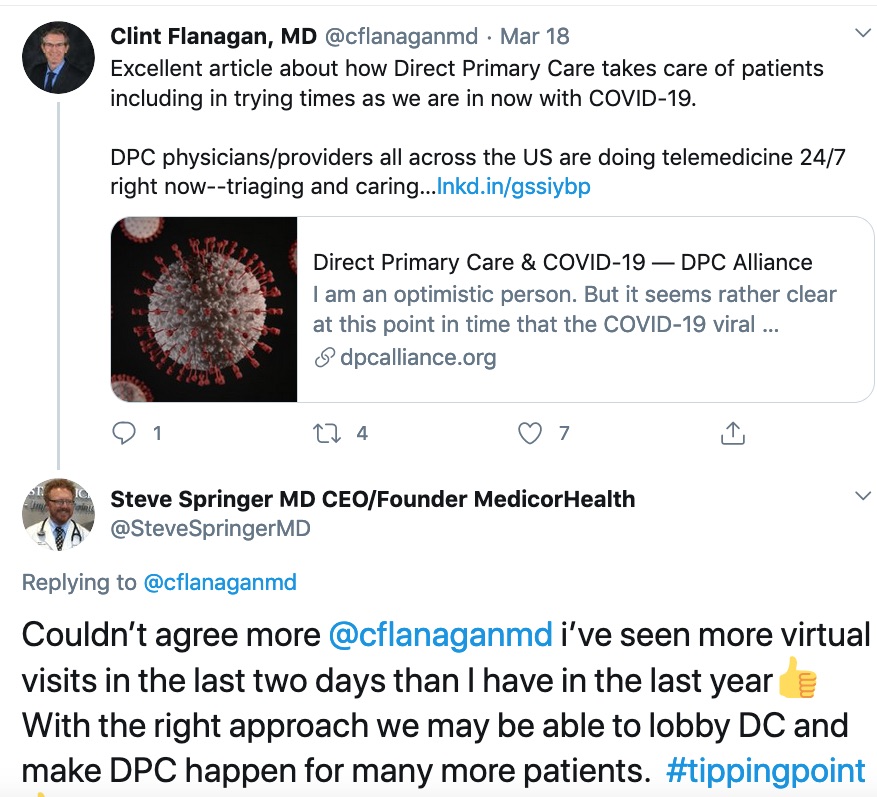 Are DPC’s lobbying crew going all in on the idea that DPC is a “proven solution” — for COVID? That making DPC happen now for more patients is a COVID strategy?

Springer: “I’ve spent two days doing virtual visits to which I was largely unaccustomed; let’s tell Congress that’s a COVID plan that only DPC can do.”

Then there’s this from another group of DPC activists: https://dpcaction.com/never-let-a-crisis-go-to-waste. In which they (DPC Action) urge that “during this time of National Emergency” Congress must pass their favorite DPC/HDHP fix.

While a DPC/HDHP fix might be justified, pandemic surge needs are not that justification.

I won’t, as such, have any objection to the principle of attaching DPC/HDHP fix legislation to any other legislation that’s moving, unless something more important in COVID-19 Package #3 is taken as a hostage to getting a DPC/HDHP fix.

A DPC/HDHP fix should rise or fall on its own merits, which may have little to do with pandemic policy going forward.

A boost to telemedicine should rise or fall on its own merits, which may have a lot to do with pandemic policy going forward.

Boosting access by lowering cost sharing should rise or fall on its own merits, which may have a lot to do pandemic policy going forward.

Pandemic COVIDcare going forward now seems likely to be optimized by”telemedicine” and “lowered cost sharing” at least at the diagnosis and early treatment stage. But these can be achieved in FFS settings, as being shown in real time at hint.com by actual DPC leaders actively recruiting actual DPC docs for FFS-based telemedicine. Arguments for surge-telemedicine are arguments for surge-telemedicine, and are best met by legislation that promotes surge-telemedicine. Surge-based arguments for low cost sharing are surge-based arguments for low cost sharing, and are best met by lowering cost-sharing where this helps deal with the surge. COVID related legislation has already moved these needles and will likely do so to an even greater extent. Telemedicine and cost barrier removal can be and is being facilitated in a very big way directly for everyone (insured, public supported, uninsured) through DPC, FFS, or other practices, for the duration of COVID-need (or even for freaking ever), all at the snap of a handful of federal and state government fingers.

Once the pandemic/public health case is made for boosting access by lowering cost sharing and practicing telemedicine, and such efforts properly funded, there’s no public health/pandemic rationale for a DPC/HDHP fix for DPC monthly fees.

At the same time, that kind of fix for DPC monthly fees is (a) limited to only those for whom HDHP plans are otherwise worthwhile and (b), even then, is only a roundabout way to upscale telemedicine and lower-cost sharing for pandemic services. In DPC, freedom from usage based cost- sharing must be purchased with monthly and even initiation fees, fees that can in themselves might act as barriers to care. But from a pandemic/surge perspective, it makes more sense to just exempt COVIDcare from usage-based cost-sharing so that, even in FFS medicine, COVIDcare goes forward. Some states have already mandated this, even for those in HDHP plans. Again, from a pandemic perspective, why try to drive HDHP plan members toward desirable telemedical care by the indirect route of offering a tax-break, useful only by some and then in varying degrees, in the hopes that some of those some will buy subscriptions for DPC? Instead, telemedicine by FFS, DPC, or anyone else can be directly facilitated as part of cost-sharing-free COVID care, by direct subsidy, by relaxation of any restrictions, whatever.

White’s piece repeatedly and primarily stresses small DPC patient panels. This is an odd thing to emphasize at a moment when what the crisis is likely to produce is a community need to have all hands on deck for relatively brief interactions with relatively very large numbers of patients.

Which do you think will save more lives next Monday: 33 ten minute focused COVID-related encounters or 11 thirty minute encounters? The ten-minute visit, usually scorned by everyone, could well be just the thing here in late March of 2020.

I would far rather have seen a DPC Alliance article that said: “We have small patient panels and we usually focus on their long-term care goals; in the current context, that luxury needs tempering in the face of community need; fortunately, Congress and has passed emergency legislation which will allow us to accept uninsured patients for COVID-19 screening and appropriate primary care; we eagerly embrace that opportunity.” As noted both above and below, some DPC have chosen to do that.

At its best point, White’s article hails telemedicine. But even that useful bit is tainted with White’s apparent belief that DPC necessarily does telemedicine better than anyone else. Still, at least White acknowledges that other forms of practice do have telemedicine capability; over at Twitter, White’s article is re-tweeted with favorable comments by DPC-friendlies who seem to write as if DPC has a monopoly on telemedicine. (Ironic, considering that one of the first tweet responses to White’s piece was the one shown above, from a DPC doc who made clear that he had just just gone a year without a significant number of virutal visits.)

I have some familiarity with the dominant large health systems in three major cities . Despite “FFS”, the large players there have robust, sophisticated, effective patient portal systems.

And every day in this middle of March 2020, we are seeing wide-scale “tele-operations” being successfully implement by schools, businesses, religious institutions, etc. In a political campaign nearly ten years ago, I learned first hand how a small group of co-workers could conjure up major telecom initiatives on the fly with a few simple software tools, net access, some lap tops and cell phones.

Certainly COVID may at some point overwhelm these systems by sheer volume. That’s not a fault in FFS-based medicine and it will not reveal a unique virtue of DPC. To the extent that individual DPC practices do not become overwhelmed, it will be because of small panel sizes, i.e., they will be doing no better than an FFS based concierge practices and doing that well for largely the same reason – small panel size. Not payment model, just small panel.

Who thinks there should be an HDHP fix for concierge fees?

And, more specifically in response to the White essay, none of DPC’s presumed advantages in a time of COVID flow from the payment model. Whether it be 24/7 telemedicine, emptier waiting rooms, healthier patients more able to survive an infection, whatever, every one of the cited advantages for DPC in a time of COVID is equally held by FFS/concierge; it’s about the panel size, not the payment model.

The more highly staffed any system is, the more headroom it will have before it break under pandemic stress. But the payment model by itself does not determine the staffing level. A far more important determinant, for example, are physician expectations of what they should be paid.

Granted, squeezing out insurance related overhead presents a good opportunity to buy some more physician bang for the medical buck. But, as I discuss elsewhere in this blog, it has yet to be shown DPC is generating the huge savings so often promised. Nextera Healthcare, mentioned above, is sometimes included as a poster child for effective DPC; but its own, current, publicly available marketing material claims overall net savings of less than 15%. That’s marginal, not revolutionary.

And even that data and analysis lacks rigorous vetting by independent professionals.

Moreover, that data compares Nextera to FFS primary care in the context of employer health plans. If the benchmark here is who can do better in the recently created Congressional COVID care for the uninsured, or in supplementing stressed networks by a streamlined telemedicine program at the diagnosis stage, that kind of work will likely have modest administrative costs. Coding geniuses will not be required, or even useful.

And that’s precisely why “Hint” is comfortable being all over the intiative mentioned bth above and below: FFS telemedicine for DPC doctors.

Department of Credit Where Credit Is Due

Better late than never, this is what DPC Alliance lead post on COVID should have been about:

In a conference call 800PM EST 3/19/20 organized by hint.com, its leadership announced an intiative to put lots of DPC’s MDs to work doing telemedicine when and where needed. They’ll hook docs up to reach into communities whereever needed. There are emergency licensing arrangements to facilitate.

Now cue the Department of Irony. This work will involve even working hand in hand with FFS-tainted entities, coding , and submitting claims for governmentally supported third-party payments.

This seems, for now, exactly what’s needed from DPC docs. Not a payment model; not 30 minute face-to-visits. And making it happen did not depend, at all, on a DPC/HDHP fix.